Soldiers of the herd

We are looking for the herd again. Their spoors are going up towards kimilamatonge we tried to follow but even if tracking them is quite easy we soon hit thick bush to thick to pass so we drive all the perimeter of the block to look if they went out but we cannot find other tracks , the herd must be in this exact area but to find them is hard.
We are not worried, they must come to drink, but we decide to do the circuit again, we did not even finish that we bumped into Evander and Holy with all their 4 cubs. They definitely are in an hunting mood. We position ourselves far and we watch. Then they went to drink came closer walking in the tall grass, climbed some rocks behind our position and decided to lay down.
We move again, went the other side of the area to give chance to herbivores to come to drink and obviously to be hunted by the cats.
Herds of zebras arrived, and many giraffes, ranks of impalas, families of warthogs, herds of kudu... everything came to drinlk but they did not move at all. At a certain point a giraffe stood eating in front of them less then 10 meters far... nothing... we were shocked... they are cats, lions and they are hungry but against any odd they did not try.... We waited hours... when we already lost our faith they started moving... they headed towards some zebras... we moved accordingly and placed the car on the bank above and the other side of the striped ones. Lions moved around the zebras, one walked around, one came all the way behind us... she stalked and she went for the herd.... was a proper run, a run that zebras won but after at least 200 meters of chase... was a fantastic chase... then the lioness went to drink and to rest in the shade of an acacia tortilis above the water.
. 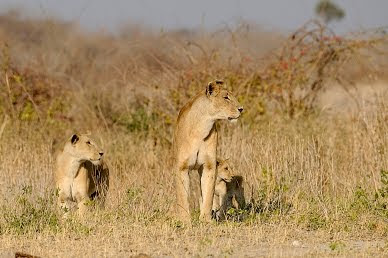 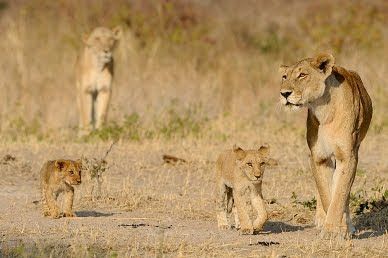 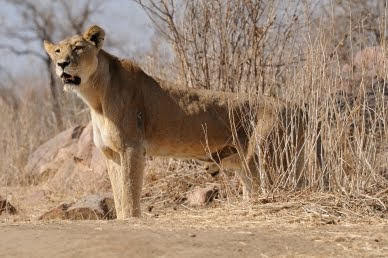 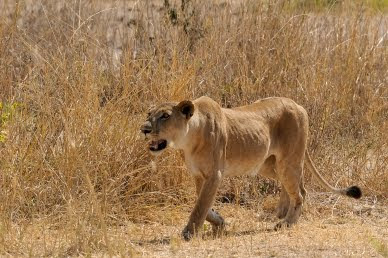 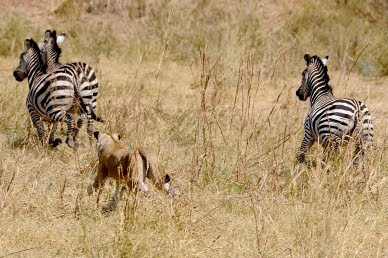 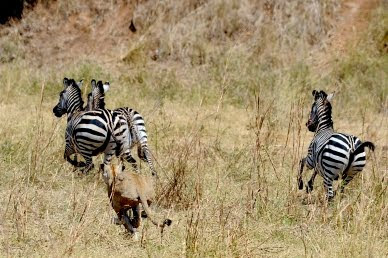 Int ten minutes time the place changed completely, buffaloes swarmed in, they filled the riverbed with their black bodies and the air with their calls. Is the same herd of yesterday and the more they come the more the head of the herd is pushed towards the last bit of water.
Now big bulls are just below the lions... lions are flat, as flat as possible... not trying to hunt but trying to be as unconspicuous as possible. Nontheless the buffs spotted them again and in no time a handful of them run out the bank and badly chased the lions off, the lioness flew full speed with the cubs trailing behind and the buffs in hot pursue. The cats reched or safety amongst the rocks but this battle was definitely won by a handful of buffaloes, a handful of buffalo soldiers, but this time the soldiers of the herd..
. 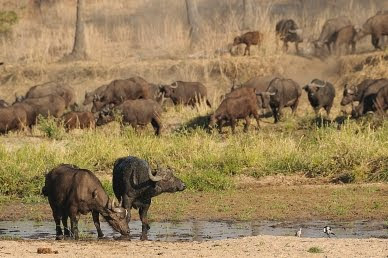 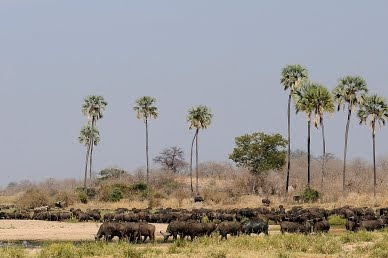 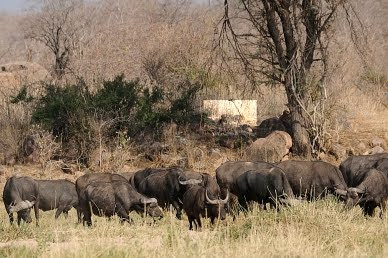