A buffalo's herd, more or less 200 strong, it is still morning, about 10 am and we are in the first forest. I am with Owen helping him out for the documentary. We drive around the buffs to check the dimension of the herd, they are preparing to doze the day off in the shade of the acacias. We were waiting for them since long time and here they are, now all what we miss are lions. an I did not even finish to tell this to Owen, that we spotted bushbuck pride, they are quite fat and they are sitting in the shadow of a bush, listening and watching the herd walking less then a 100 mtrs apart behind a curtain of thicker bushes. Even if the cats are well fed we reckon that the chances of something happening are promising and so we park and wait.
We chat hour after hour, after hour, after hour.... nothing happens till 1530 when we hear the buffaloes slowly moving off, we also move and briefly check them, they are moving towards the riverbed so after some pictures were dutifully taken we headed back to the lions. Just in time! Two of the females are already walking towards the herd.
. 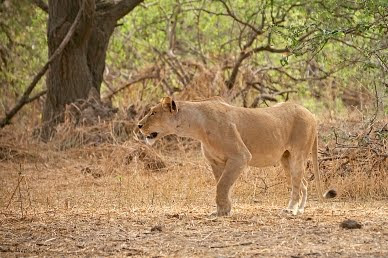 The setting is stunning, the forest, the stalking lioness, the bellowing buffaloes. Our heart beat is racing now, we know that something is gonna happen and we do not want to spoil it nor to loose the action. We have to move carefuly and skillfully. Most of the herd is already crossing the riverbed. The lioness is walking as flat as possible, crosses in front of the car and climbs the small bank down. We also reach the river and wait. The herd splits, some buffs are left behind and the lioness walks and crouches straight in the gap between the two splits. She is almost invisible in the sand, hidden by small clumps of grass. Six or seven buffs come running down the bank, they are heading towards the lioness, they did not see her but she did not really try them and she just reappears in a cloud of dust. She crouches again and she waits, other buffs are coming. The air is tense, the buffaloes know that something is not quite right but they do not know where the danger is. Some move down, but instead of following the herd they turn more west, as if sensing where the cat is. It is a good move but not good enough, the lioness runs, she forces a buffalo cow in a corner. The buffalo is trapped, the bank behind, the cat in front. It is surreal, the lioness sits in front of the buff, the time stops, for some seconds nothing happens. The lioness snarls at the cow, the cow charges, the lioness backs off, the cow stops, the lioness comes forward. She is luring the cow, she is studying her moves and she is getting ready to make her own. The cow comes forward again and as she is close enough the lioness paws her head provoking a predictable charge, exactly what she expected, what she was waiting for. She launches forward and grabs the head of the cow, her pectoral muscles flexed to absorb the impact of the charging cow, her jaws biting the cow's neck.
The cows tries to toss her, to trash her against the soil but to no avail, the lioness does not give up, she firmly holds onto the cows head. Another lioness arrives, in a second she is on the back of the cow, the cow steps back slowly towards the bank and then in a split second she is down. Now the lionesses are 4, the lone cow still alive, her eyes wide open, shock overhelming. Some lioness are already chewing on her, the hunter pulls her head back and after some seconds the last lioness bites the cow's exposed neck. The end then is a matter of seconds.
. 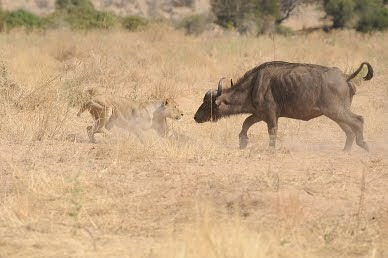 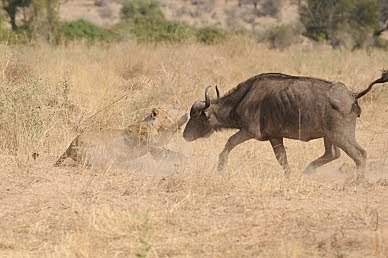 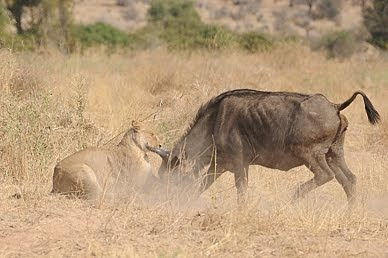 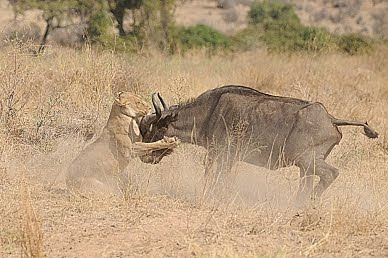 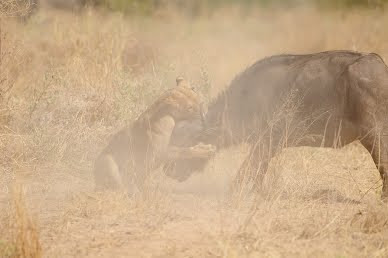 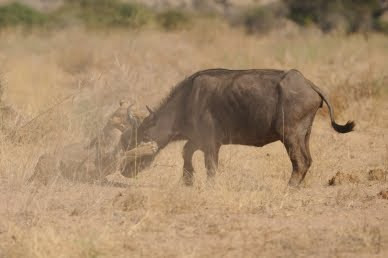 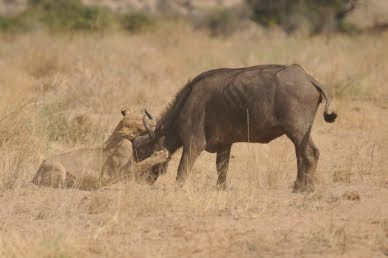 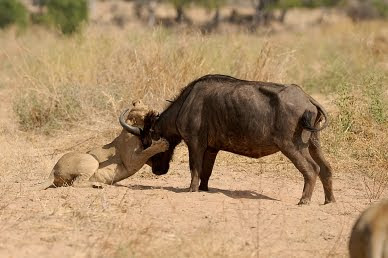 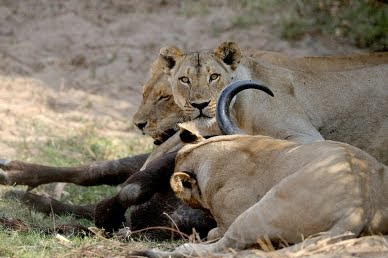 Other buffs are coming, a lioness stands up and goes towards them, they flee but she goes on, we follows. The males are not there at the kill and this is very weird, so after loosing the lioness in thick bush we go to look for them. And we soon find them, they just killed a buffalo by themselves, they snapped its neck judging from the position of the buff, they are panting... probably all happened while the female were busy with the first kill. 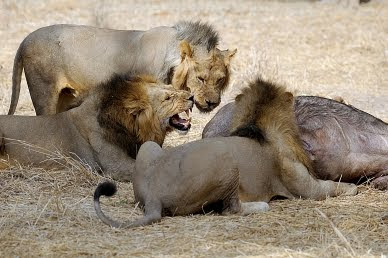 Buffaloes are bellowing again somewhere so off we go again, chasing another possible kill. We search for some minutes but we cannot find them so we go back to the first kill, the fourth lioness is back with her two shy 2 months old cubs.
We watch the bloody cats feeding for a while and then we go back to the males.... quite hectic.
. 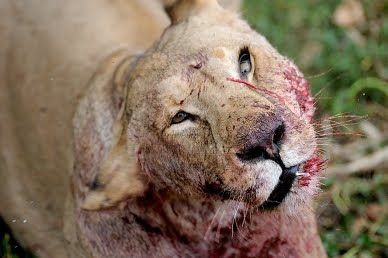 In the brief bracket of time since we left them they unleashed hell again... another buffalo down, another snapped neck. We are stunned.These lions are demons, they did not kill out of hunger, they already had one buff and they were fed, they killed out of instinct,they killed out of bloodthirst, they killed out of adrenalin rush, they entered a killing frenzy that made them chasing everything was available and they did it well. They are buffalo soldiers.
The adrenalin is still kicking in when we arrive and they are hissing growling and snarling at us... the show is quite impressive considering also the fresh blood smearing their faces.
The scene is breathtaking, the yellow eyes of the lions in contrast with the red muzzle made even more shining by the afternoon golden light, the yellow coats of the cats surrounding the black one of the buff, in the background tall acacias and nervous elephants.
There is no place we would have chosen to be today other then we were, there is no thing we would have chosen to do today other then what we did.
Buffalo soldiers. 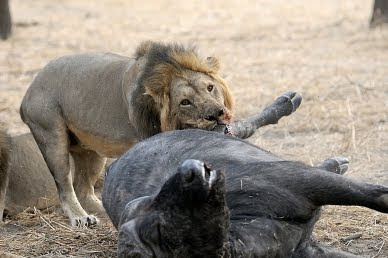 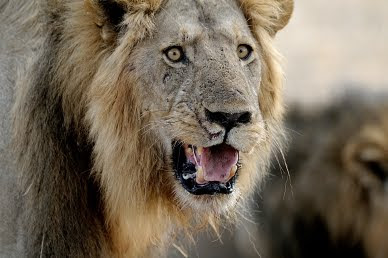 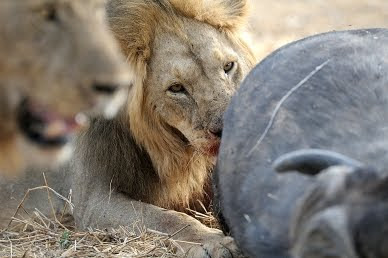 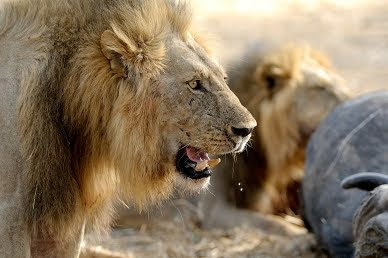 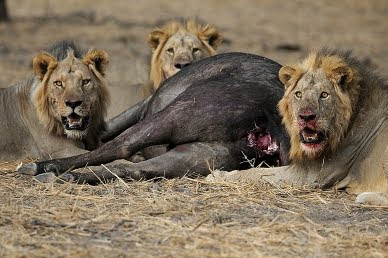 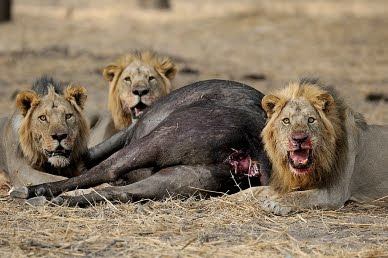 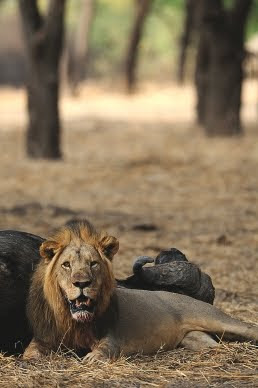 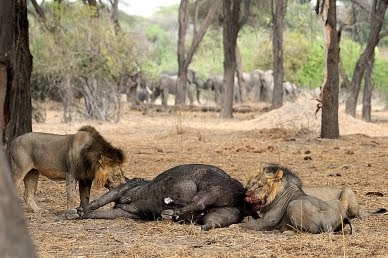 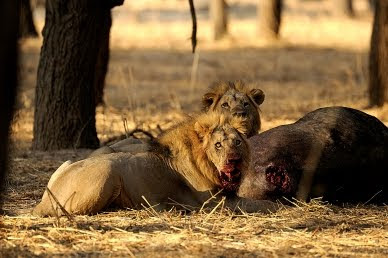 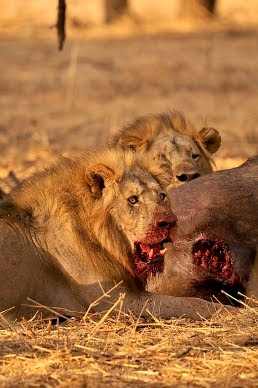 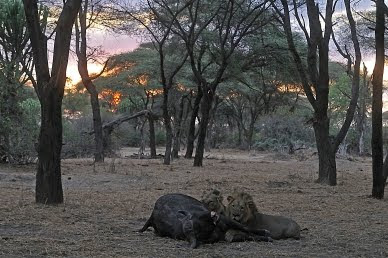