A long way back is waiting us, we have to reach Karat Konso but we will use a longer road in order to be able to visit another tribe, the Arborè.

Again we drive mountains up and down, these ridges are probably the reasons why the Omo valley’s tribes remained so isolated and developed so many differences between each other even in an area that is so small. We met some Hamer on the track going in the opposite way, towards Turme, today is market day there.

We drove for sometime in beautiful mountains and gorges to end in the same open plain of 2 day ago, but we entered it form the opposite side. From this point on the drive comes quite boring, flat semicultivated landscape with the mountain ridge on the background.

We reach the Arborè village and immediately we noticed some differences. As soon as we parked the car people started running towards us, kids grabbing and wearing a strange hat made of an half pumpkin shell. They are funny looking, they resemble little aliens. We went out of the car and people became very pushy in asking us to take pictures in order to get money. We talk to the local guide and he speaks with the people to obtain the same deal we had with other tribes. All is sorted so we move to the village. This people is very peculiar, kids with the pumpkin, young boys with the face painted with dots, women with a black veil on the head and plenty of blue beaded necklaces on the chest 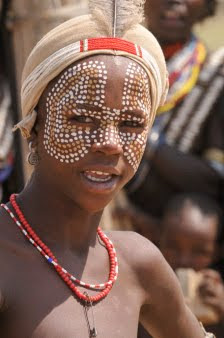 Differently for the Dasanech ones these necklaces are long reaching almost the belly. Often a steel decoration made by watch’s wrists is hanging in the middle like a sort of tie 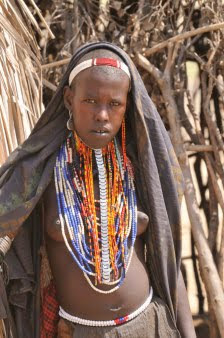 The problem is that they are way too aggressive, they pushed us back and forth and even if we had a deal with the village every individuals asked for many, eventually we stopped taking pictures counted how many pics of each we took, paid and left the place. I do not know where the mistake was, if from the local guide or the tribesman but we did not appreciate what happened and even if the village and the Arborè were interesting to see I would probably avoid it the next time 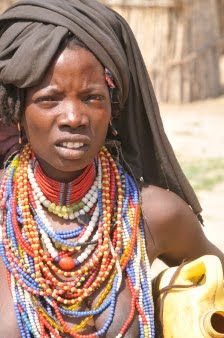 People were physically pushing us to get money, and we had to become a bit aggressive to gain respect and this is not nice. We entered the village with great respect and giving money for the pictures is fine to me, being pushed and shouted for nothing definitely not.

We proceeded and before reaching the junction we met to gentle Tsemay women, we talk to them and enjoyed being with nice people again 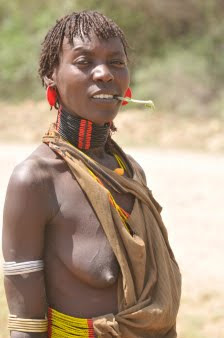 Eventually we went for lunch, drove towards Karat Konso buying some incense from kids on the road. In town we briefly visited the market of the Konso tribe, very busy very colourful because of all the cotton fabrics they are selling, women traditionally wear a white and coloured long cotton skirt and men blue striped coloured cotton shorts 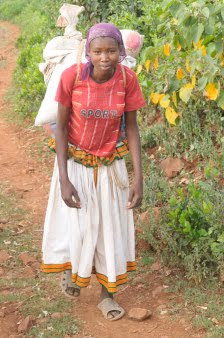 After leaving our luggage in the hotel we went to visit a konso village. Very interesting, they build villages on the top of steep hills, the hills are all made into terraces for cultivation, each terrace is hold by a wall of stones and peebles collected from the same land.

We visited the chief's compound, very organised, interesting explanation where given to us about an empty hut. When the chief dies thay mummify him and keep him in that special hut that is already prepared in his compound, it will be said that the chief is sick untill a new chief is chosen. We walked the village in narrow paths bordered by the walls of the compounds every now and then an open square appears, in the middle of this squares there are always tall tree trunks, they are the generation's poles. Every 18 years the new generation has to place a new tree trunk taller then the previous one, you can actually estimate tha age of the village counting the trees. In front of the trees there are monolithic columns, they are rough and squared in section and are there to remember an important victory over enemy tribes.

Lot of characteristics of the village tell that the Konso have been fought a lot, the location on top of the mountain, the walls everywhere protecting the people, the monoliths and thye even have communal huts, elevated from ground that are used by young boys to sleep by night, the youngster role is to socialize and make tribal bonds stronger but they basically act as sentinels in case of enemy attack.

We did not expect such a developed village, it was more what we would have expected from a middle-age small European settlement then from an African tribal village. Stunning stunning place.

Climbing the mountain down we saw all the women climbing up towards home after the market day, all of them walking the steep road with their heavy loads on the back. 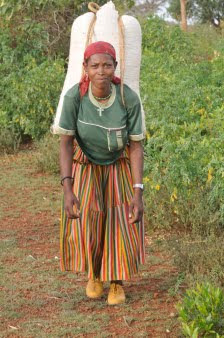 Onestep after the other, tired to the bones but always with a broad smile. I was impressed, I am impressed