Impala kill, dogs and much more...

Went off with Owen early morning... two males and four females of Two forests pride are very close to a small buffalo's herd around one hundred strong... Lions are awake but they do not move... we wait, full of hope but nothing happens... the two last buffs even walked within 4 meters from the lions without seeing them but the lions did not move.... maybe it is too hot already or these lions are just dumb.... I go for the first answer but just because we saw already what this pride can do to buffs..
. 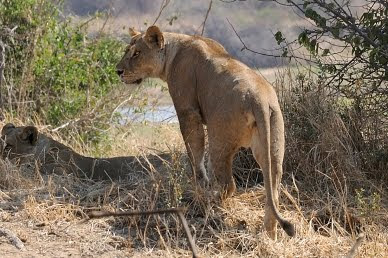 Kahimba called me to tell that a pack of dogs was resting close to mdonya and so we decided to go there briefly.. but plans in this part of the world never go accordingly.. We spotted Ten, Owen's favorite pride on the other side of the river... all the cats are in the river bed except one in a bush on the bank.
We decided to stay... Impalas are coming down to drink. The herd moved quite fast and reached the bank past the lone lioness in few minutes but she did not move... the impalas went down, slowly, one by one as they always do.. afraid of every sound, hesitating like teenagers at their first date... the lioness waits, waits them to be all down, waits them to be comfortable. Once they are down she still does not move. Owen is rolling, I did not even take the camera... for a change a want to see what happens without worrying about exposure and focusing
One impala ewe slowly finishes drinking... the seconds seem minutes... she walks towards the bank... the lioness walks fast and low to the closest bush up the bank.. the ewe walks up unaware and in a sudden is too late...
The lioness bolts out of cover just above the impala, the ewe tries to turn but there is no time, the cat hits her and they roll down the bank in a huge bowl of dust. Out of the dust the ewe reappears she is falling belly up, just after her the lioness materializes in a lighting of yellow fur and white jaws. She closes her long canines around the exposed neck of the impala... and life shifts away from the beautiful ewe..
I less then 2 seconds all the other arrives transforming a skilled piece of hunting, almost a piece of art into a gruesome tug of war for the last piece of meat.
I decided to go and have a look to the dogs so I left Owen and drove to mdonya, we spotted another pride of lions in the shade, they were looking at zebras so I called Owen and went on with my dog's chase...
It was so nice... 6 adults and six pups... super beautiful...
They were a bit shy but I did not approach close so I could observe them for long time. They are special animals, stunning and intelligent... I have been waiting all this season to be able to have a nice dogs sighting like this... Joy!!
Some adults are very white, others very black, the pups are a mixed cute bunch of furry balls with legs.
When I left them they were still in the same position, nothing changed for them but I was a lot happier then before seeing them..
. 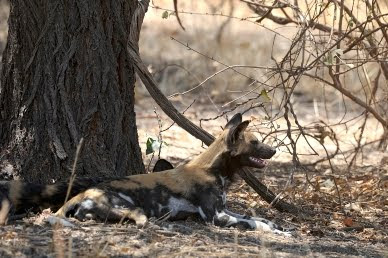 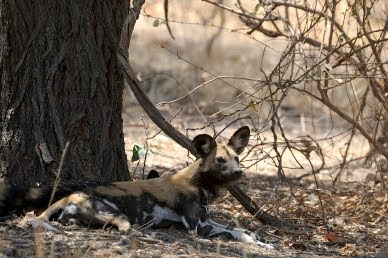 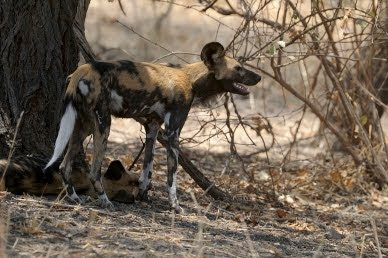 On the way back to Owen we got Evander and Holy checking giraffes at w7.. the 2 lioness were under an euphorbia on high ground looking for anything coming down. Buffaloes were not far but they are not buffs hunters and I wanted to go to the river drive so we went off. We got other two lions at the old airstrip and eventually I jumped in Owen's car again.
We kept checking on the three prides in the river drive... Three lioness of Ten pride walked into the river bed as buffaloes started pouring in from the other side... the cats looked interest but they did not move closer really... the buffs drunk and walked off.. We checked then Two forests pride a we could find only one male.. fresh tracks of the others were heading on the trail left by buffs, we started tracking them but we lost the spoors in thick bush and had no time so we leaped forward to join with the trailing edge of the buffalo's herd. We found the buffs but no cats... so off we went again to the last pride in the first forest..they were looking at giraffe but then the giraffe walked away so they went back to sleep... and went off again, now to w7 looking for possible interaction beetween the buffs and male lions that were seen in the morning... but nothing happened so we had a look to Evander and Holy and went to camp after an incredible, fantastic, astounding and hectic day in this insane place...
.... Jiwe