We drove all the mwagusi valley without a single cat, then I thought
that maybe I could look around the bushbuck to see if the local pride
was still around after their giraffe kill of the other day.
Bushbuck area was empty but just after the beginning of the first
forest, Tony a new trainee guide, spotted a lioness that was busy
giving a fright to some Grant's gazelles.
Few meter further we got all the pride and to our amusement the number
of cubs was insane.... 16 cubs below the age of 5 moths... 9 of them
even below 2,5 months...... unbelievable.
The total count was 25, the cubs, 7 adult females and 2 adult males.
Together with our super nice guests we enjoyed them for long time,
especially the cubs walking one over the other and competing for the
best suckling spot.
After a while we went to have breakfast and spent some time admiring
the flowing Ruaha river.
When we moved off we discovered that also the lions were doing the
same... all except the small small cubs that probably had been stashed
somewhere.
16 lions walking towards us was an outstanding experience.......                                                               Ops I almost forgot to mention... leopard in the afternoon...
.... Jiwe No comments:

Lions did almost everything they possibly can do to amuse us... and in the end very small cubs came out of the bushes and crossed the road in front of us.  Tiny Tiny little things with big eyes and a wobbly walk.....
.... Jiwe No comments:

P-A-N-G-O-L-I-N!!!!  There are no words to explain what i felt when we saw it, a ground pangolin, the holy graal of guiding, the top ranking animal in my wishlist. I was and I still am overhelmed by joy.
We were driving up the road of kimilamatonge when we stopped to watch lesser kudus that as usual disappeared in less then ten second, when something moved out of the thick grass, the guest asked what it was and both me and Festo went.... PANGOOOLIIIIIN.
The guests must have think we were crazy for how we got excited... was unbelievable... I am really short of words... it was something sooo special. He went curled in a protective ball, all the shiny scales creating an impenetrable barrier, then slowly came out and rushed towards a combretum where he stayed for long before heading to the tall grass. When it was at the tree it kept hiding the head and popping it out again giving us a great chance to observe it, its heavy body armour, its long and powerfull claws, its small balck eyes.... I feel emotions even while writing. I will never forget, it was perfect, it was distilled awsomeness. 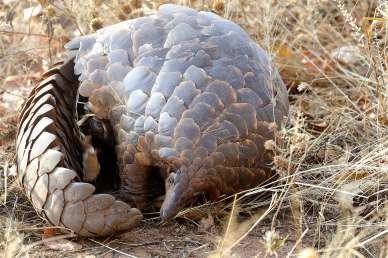 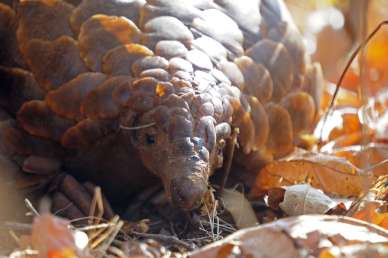 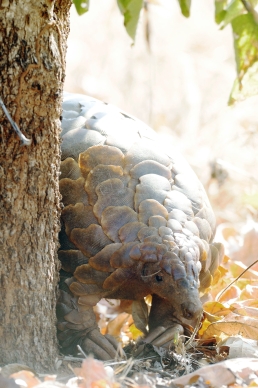 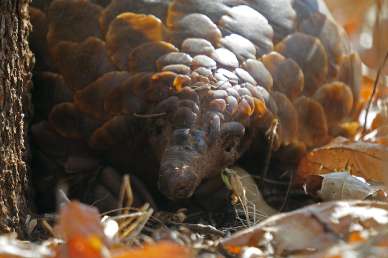 Ok I do not have pictures of today because my camera went on strike but nontheless we saw a beautiful african cuckoo hawk, the first both for me and Festo, we were so happy, we danced like kids.   Later  we had many many elephants and kwihala pride eating a giraffe again...
We were pretty lucky because we spotted them on the way to pick up guest and that made our afternoon much easier.
No pictures of today but a small one from yesterday.... moon eclipse from my tent.... 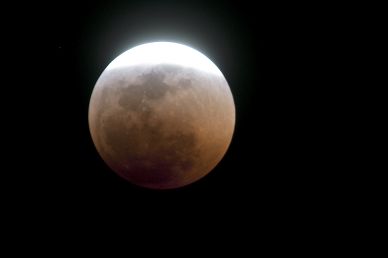 What a day, despite the fact that I am still sick I really enjoyed the drives. I was still in bed, under my cozy duvet when lions and hyenas started fighting somewhere towards west. A lion roared first and then after some minutes a chorus of hyenas followed by the lion's deep growls.... As soon as we got to the car we moved down to mbagi looking for action... From far we spotted one big male, one of the fab four, it was walking towards mbagi forest with a huge round belly. As soon as we approached it disappeared in the thick, these guys are not yet used to us.... but from up the hill hyenas were still giggling so we moved up, we found six of them moving slowly and sniffing in the air, we followed and they brought us to the lions. Eleven of the mbagi pride members were finishing of a young giraffe, completely surrounded by frustrated hyenas. 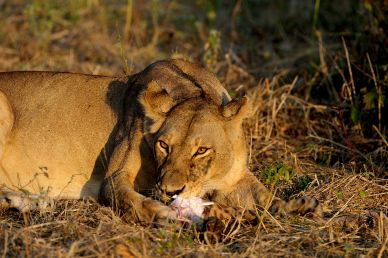 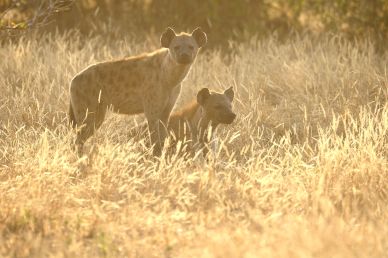 An hour later we moved off towards w7 and close to there Festo did one of his magic tricks, he spotted a young male lion that was almost invisible... for sure invisible to me.... it was with 3 females, one of them went on and on cleaning her paws, showing us her powerfull claws while doing it.... sooooo nice... 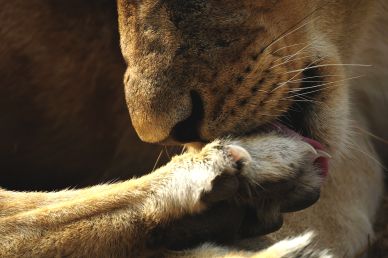 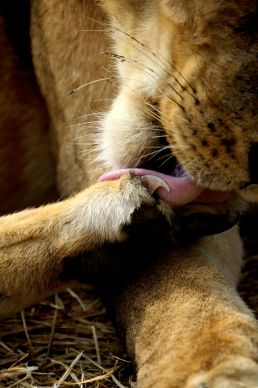 After lunch we brought our guest to the airstrip and got other 8 lions at mdonya juu..... then we slowly drove back... we spotted a amily of balck faced sandgrouse, father, mother and three chicks.... man o man, the cutest chicks nature could have invented, fluffy, sweet and with that strange giraffe pattern... and was also special to see how both the male and the female dutyfully protected and took care of the small ones..... I love them. 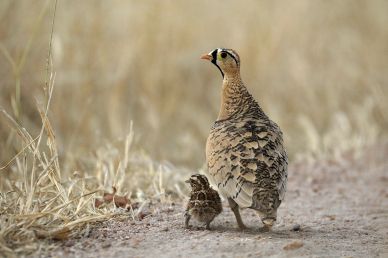 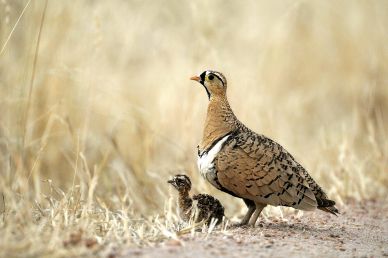 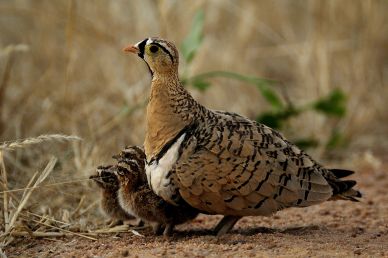 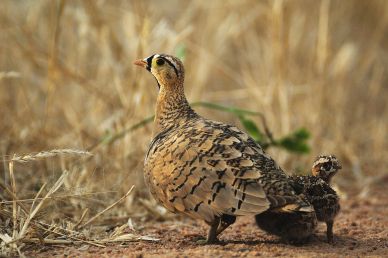 But the best thing, the sighting that gives the name to the post was yet to come... and it is not the story of a hopeless latin lover ....
We were just after mbuyu ya tobo when we saw two black backed jackals frantically jumping and pouncing in the tall yellow grass while a poor red necked spurfowl was going ballisting running all around. The bird eventually flew off and as we approache one of the jackal got scared and run away. But the other did not, it was still, tense, the ears facing forward... listening. We immediately realised that it was after the chicks of the spurfowl. After some minutes the jackal heard something, and jumped diving in the grass and emerging wth a chick in the jaws... the poor little one did not manage to stay still and silent and was immediately located by the cunning predator..... thankfully after this first success the jackal left giving the chance to the spurfowl to get back to the other chicks still hiding from the danger 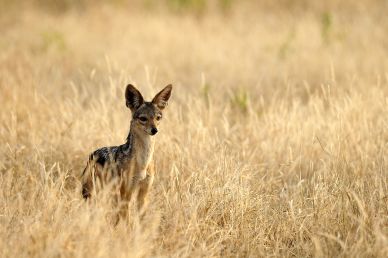 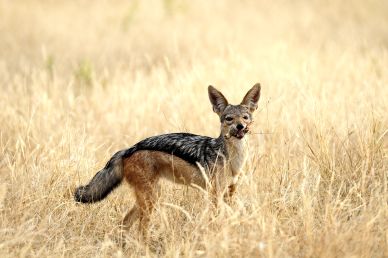 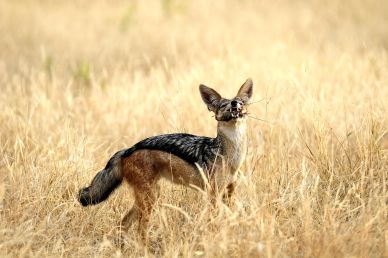 We saw lions in the morning, we saw lions in the afternoon.... but nothing can compare with a close sighting of my favorite bird... the mighty AFRICAN GREEN PIGEON, we spotted them close to maji ya nyegere they were perching on a low bush so we approached slowly stopped the car... and then closer... and closer... and closer... most of them left but one stayed..we were no more then 7 meters from the colourfull bird hat was busy preening and looking around.... how many colors in a sinle bird... from green to rusty brown to yellow without forgetting the white of the bill, the pink of the feet and the blue of the eyes.... almost a tanzanite blue....
Eventually it went o the ground pecking something that we realised was nothing else then small solid parcels of soil.....
how cool is this bird?? 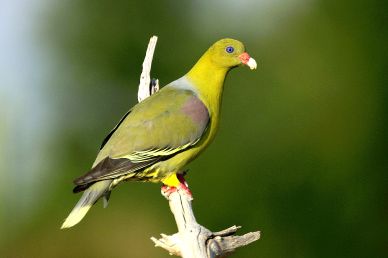 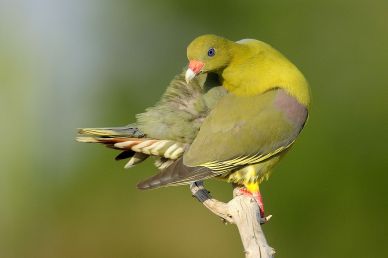 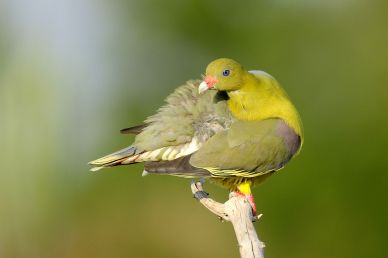 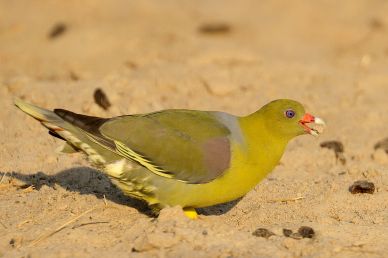 I have been very very lazy in the last months, I have been guiding in Namibia and all over Tanzania in a long long private safari that was wonderfull, I have been walking in South Africa with my friend Marius and the guys of Bushwise and it was great fun.... but i did not write a single line.... I will write about the highlights of these trips... I will but not now... The new season in Ruaha started more or less one month ago with a big ellie bull at Festo crossing, I had ten days in may where I trained guides of the owner's safari company, Lesesa.... 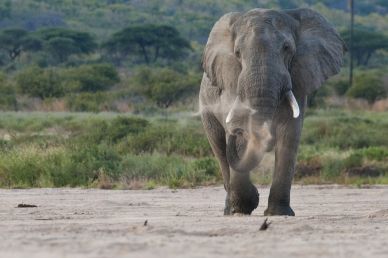 ..ten days is not a lot but I could see passion in the eyes of the guides and was again good fun, then I got sick, the 27th of May, very very sick... malaria, not malaria... took coartem, went to Tosamaganga hospital... 5 days there, drips and tests... got out but till now I am still feverish.... we will see...
So far we got three agents in camp.... all nice people... all people with love for the bush... today with the last one we had quite a brilliant drive.
Got lions in the morning, hungry ones... we followed them for long time along th river and when they started stalking impalas we waited.... eventualy they chased ... we lost them and found them again over a dead ewe..... nice job... 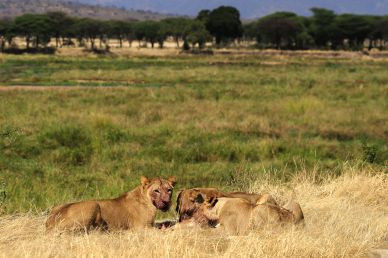 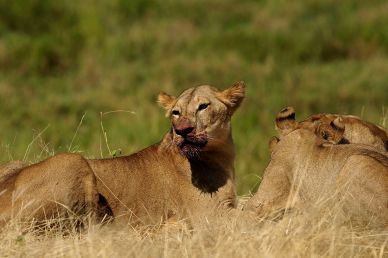 In the afternoon we had a bit of surprises.... Serval on the way to mwayembe.... spotted thanks to impalas staring in his direction... then bat eared foxes..... and on the way back CARACAL..... the only problem? the average sighting was maybe 7 seconds... but still.... even a glimpse of a caracal is something absolutely priceless.......
At the spring we also found two nile monitor lizards mating.... funny stuff with the male haveing the time of his life on top of an utterly bored female... and the thing went on for hours.... 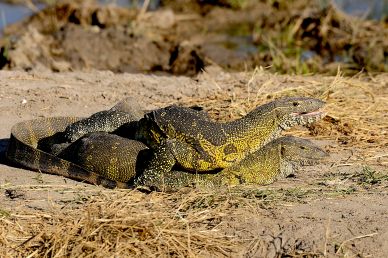 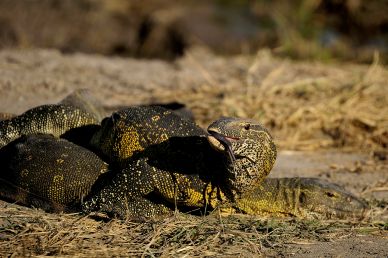