Morning in camp, making order in my things (big job) and checking accounts and expenditures (boring job), and answering emails (just job).
Got informations about an elephants that apparently had been poached so we went to see after asking permission.
Luckily the elephant had not been killed by poachers, not that this made a big difference for him, so we felt a bit better.
There was the dead elephant, a dead jackal probably killed by lions and tall grass, plenty of vultures on the trees, billions and billions and billions of maggots of bow flies feeding on the carcass, lions spoors but no lions.
The smell of rotten meat was absolutely unbearable, was like something solid crawling up my nose and clasping my throat.
After some time while we were taking pictures a male popped out of the grass and headed away, after som more seconds we heard an upset growling behind the car. Lions were everywhere totally unseen in the tall grass.
We left the place and three big elephant bulls on the way back set our heart to peace again.
. 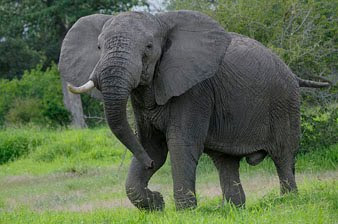